The plot of most stories figuratively forms the shape of an arc. A story arc graphs the typical way that a character meets and solves dilemmas and then emerges from a plot as a more developed individual. You can use the story arc as a general framework upon which to base your creative writing and a guide for instilling your plot with the momentum that makes it compelling to your readers.

The Elements of the Story Arc 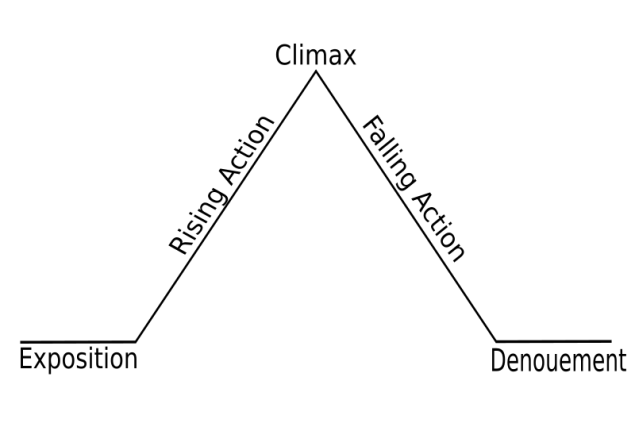 The story arc concept goes by various names, including Freytag’s Pyramid, the narrative arc and the plot diagram. At its most basic, the story arc contains the following elements:

Exposition most often occurs during the outset of the story but comes back into play throughout the plot. During the beginning phase, you set the scene, introduce characters and provide hints that foreshadow the action ahead. For example, in the young adult novel “The Giver,” author Lois Lowry opens the book by introducing the main character, Jonas, and his family. She mentions that Jonas is apprehensive about the upcoming meeting where he and other 13-year-olds will get their career assignments.

The conflict or incident that follows the initial exposition sets the plot into motion. This incident challenges the ideas, emotions or lifestyle of the main character. Jonas’ conflict is the career that the community elders have chosen for him. He has been singled out to become the new memory keeper for the entire community, a job that is both the most difficult and the most honored.

Rising action is the uphill portion of the story arc. Once the inciting incident occurs, the main character becomes caught up in the momentum of the plot. This may mean learning new things that broaden his or her perspective, or it may be the discovery of an uncomfortable truth. In “The Giver,” Jonas undergoes training for his new role, gleaning both joy and pain from the memories he inherits from the previous memory keeper. His perspective widens considerably, irrevocably changing his perception of his community and causing him growing distress.

The climax occurs at the highest point of the story arc. It is the moment where the protagonist moves beyond the point of no return, no longer able to justify inaction, and takes steps that change his or her fate. In fairy tales, the climax is when the hero defeats or outsmarts a villain. In other stories, the climax may be the attainment of the hero’s quest, whether that is a rescue or the answer to an important question. In a tragedy, the climax often marks the death of the hero, the loss of a loved one, or the revelation of a hero’s tragic flaw. The climax in “The Giver” occurs when Jonas learns the truth about his father’s role in the new child nursery and the fate planned for the baby his family has fostered. He is forced to make a decision that will change many people’s lives.

After the climax, the story arc swings downward. The plot follows the protagonist as he or she works through the results of a climactic decision. Your readers learn whether the main character triumphs and how the future is likely to change. The falling action of your plot often calls for more exposition that helps your readers understand the new order of things. In saving the baby from his expected fate, Jonas must run away from his community into the mysterious beyond. The author describes the new landscapes and the new relationship that Jonas develops with his little foster brother.

Finally, at the end of the story arc, you describe the resolution to the plot. You may simply follow the hero as he or she begins a new life, or you may revisit those left behind to finish their stories. Whatever you decide as the writer, your main consideration should be providing a satisfactory resolution to the story that your readers will buy into. In “The Giver,” the author invites her readers to go a step beyond the story in imagining Jonas’ promising future.

Draw a story arc on a blank sheet of paper. Label it with the elements of a plot, including:

Choose a fairy tale, short story, novel or play. Reference its plot to fill in a short summary from the story for each labeled element along the arc.

Draw and label a second story arc. Create your own plot to use as a guide for filling in each point along the arc. Use your new arc diagram as an outline for completing your own short story.